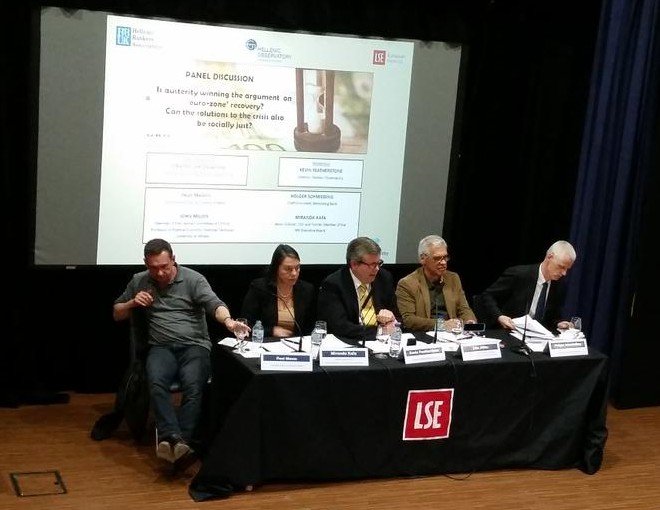 In London School of Economics

In order to answer to the questions posited by the Organizers of today’s discussion, we shall first comprehend the social content and the workings of austerity. The following four theses summarize my theoretical view.

1. Austerity constitutes the keystone of neoliberal policies. On the surface, it appears as a strategy of reducing entrepreneurial cost. Austerity reduces the labour cost of the private sector, increases profit per (labour) unit cost and thereon boosts the profit rate. It is complemented by economy in the use of “material capital” and by institutional changes that on the one hand enhance capital mobility and competition and on the other strengthen the power of managers in the enterprise and bondholders in society. As regards fiscal consolidation, austerity gives priority to budget cuts over public revenue, reducing taxes on capital and downsizing the welfare state.

2. However, what is cost for the capitalist class is the living standard of the working majority of society. This applies also to the welfare state, whose services can be perceived as a form of “social wage”.

3. It is clear then that austerity is first and above a class policy: It constantly promotes the interests of capital against those of the workers, professionals, pensioners, and other vulnerable groups. On the long run it aims at creating a model of labour with fewer rights and less social protection, with low and flexible wages and the absence of any meaningful bargaining power.

4. The institutional arrangement of the Euro-Zone, with the ECB being deprived the power of a lender of last resort, deliberately reinforces neoliberal policies. Member states will not always have the necessary liquidity to pay off bondholders. This will make the downsizing of the Welfare State a precondition for financial solvency. The ruling European elites have thus voluntarily subjected themselves to a high degree of sovereign default risk in orderto consolidate the neoliberal strategies. In other words, they have jointly decided to exploit the crisis as a means to further neo-liberalize state governance.

From the above theses becomes apparent that austerity wins the argument with the mainstream mass-media and intellectuals who support the class views and interests of the ruling elites. However, it can hardly win the argument with the working majority, even not in marginal conjunctures of crisis, when the elites portray any alternative to neoliberalism as a “disaster”.

The working majority will always be opposed to shrinking wages and precarious employment, to degeneration and cut-back of public services, raising the cost of education and healthcare, weakening of democratic institutions, strengthening of repression. They will always conceive the “crisis of labour” (i.e. unemployment, precarious and underpaid work etc.) as a social illness that shall be tackled by itself, not as a side effect of the recovery of profits.

The inner workings of an enterprise constitute a battlefield between antagonistic interests. As Karl Marx commented on the limits of the working-day: “The capitalist maintains his rights as a purchaser when he tries to make the working-day as long as possible […] On the other hand, […] the labourer maintains his right as seller when he wishes to reduce the working-day to one of definite normal duration. There is here therefore an antinomy, of right against right, both equally bearing the seal of the law of exchange. Between equal rights force decides” (Capital. Vol. 1, Penguin Classics, p. 344).

The continuation of austerity is a matter of the social relation of forces. If austerity persists, the European ‘welfare model’ will be remembered as a bad joke.

Beyond certain limits, the subjection of all parts of social life to the unfettered function of markets and the dictate of profitability may function as “political risk” for the neoliberal establishment, since it can easily trigger uncontrolled social outbreaks. As Franklin D. Roosevelt stated in his speech at Madison Square Garden, New York City on October 31, 1936: “We know now that Government by organized money is just as dangerous as Government by organized mob”.

From historical experience we know that an alternative to austerity and neoliberalism does exist. The European social model must and can be re-founded, social needs must gain priority over “organized money”!