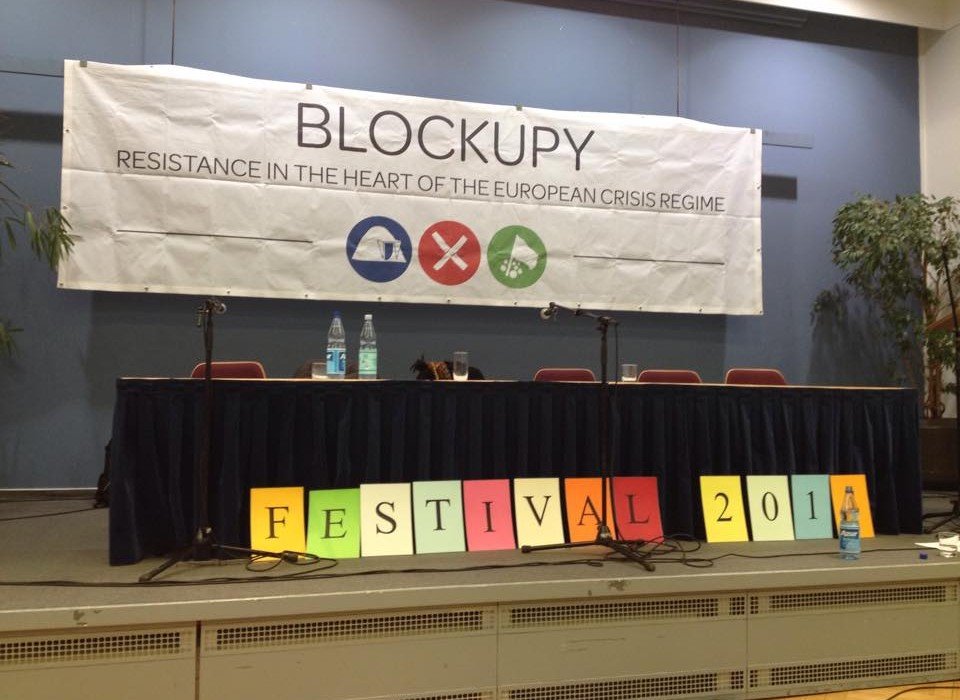 1. On the character of the crisis

In order to answer the question stated by the organizers of this very important meeting, we must speak about neoliberalism and the financial sphere.

Neoliberalism is a form of capitalist exploitation, i.e. of extracting surplus value and strengthening the power of capital over the working classes and the social majority, based on the crucial regulatory role of the globalized financial sphere.

The financial sphere is not simply the reign of speculation, is not a casino, it is much more an overseeing mechanism, in the last instance a form of governmentality.

In our analysis we shall not forget the basics. Karl Marx ’s analysis in Capital, esp. in Vol. III, on the structure of the financial sector in advanced capitalism, allows us to construct a scientific approach to financialization.

In his analysis, Marx acknowledges that the place of capital may be occupied by two subjects a money capitalist and a functioning capitalist.

In the course of a lending process, the money capitalist becomes the recipient and proprietor of a security, that is to say a written promise of payment from the functioning capitalist, the manager.

In Marx’s own words: “in the production process, the functioning capitalist represents capital against the wage-labourers as the property of others, and the money capitalist participates in the exploitation of labour as represented by the functioning capitalist” (Marx 1991: 504). The secondary contradictions developed between the managers and the big investors certainly do exist but they minor in comparison to capital-labour class contradiction.

Every enterprise is a Janus, comprising on the one hand the production apparatus per se, and on the other its financial existence, its shares, which are being traded on the global financial markets.

The inner workings of an enterprise constitute a political terrain. The production of surplus value constitutes a battlefield situation where resistance is being encountered, meaning that the final outcome can never be taken for granted. Techniques of risk management, organized within the very mode of functioning of the “deregulated” money market, are a critical point in the management of resistance from labour.

Financial markets generate a structure for overseeing the effectiveness of individual capitals, that is to say a type of supervision of capital movement.

The demand for high financial value puts pressure on individual capitals (enterprises) for more intensive and more effective exploitation of labour, for greater profitability. This pressure is transmitted through a variety of different channels. To give one example, when a big company is dependent on financial markets for its funding, every suspicion of inadequate valorization increases the cost of funding, reduces the capability that funding will be available and depresses share and bond prices.

Confronted with such a climate, the forces of labour within the politicized environment of the enterprise face the dilemma of deciding whether to accept the employers’ unfavourable terms, implying loss of their own bargaining position, or face the possibility to loose their job: accept the “laws of capital” or live with insecurity and unemployment.

This pressure affects the whole organization of the production process. It therefore presupposes not only increasing “despotism” of managers over workers but also flexibility in the labour market and high unemployment. Hence “market discipline” must be conceived as synonymous with “capital discipline”.

Financial markets commodify the claims on future surplus value. The striking growth of financial derivatives since the early 1980s assists in the consummation of this monitoring process of scrutinizing corporate asset portfolios (i.e. scrutinizing firms’ capacity for profit making) by commodifying the risk exposure.

The theoretical sketching that I tried to present above apprehends the phenomenon of capitalist globalization and financialization as a complex technology of power, the main aspect of which is the organization of capitalist power relations. It should be comprehended as a technology of power formed by different institutions, procedures, analyses and reflections, calculations, tactics and embedding patterns that allow for the exercise of this specific, albeit very complex, function that organizes the efficiency of capitalist power relations through the workings of financial markets.

The above arguments make it possible for us to characterize the crisis.

It is a crisis that has appeared in the financial sphere and is systemic. Systemic in the sense that it has been engendered by the elements and the relations that are at the core of the neoliberal model.

The crisis is global, not only European, is a crisis of financialized capitalism.

2. Crisis politics. (The crisis as an opportunity for the ruling classes).

The strategy of the ruling classes in each and every country of the EU (and beyond it), is the devaluation of the price of the labour-power: directly through wage and pension cuts, indirectly through dismantling all forms of public services and welfare mechanisms of the capitalist state, through privatization of public goods and services etc.

It is a class strategy which aims on the one hand at suppressing the historically achieved, in class-struggle, living standards of the European working classes, and on the other at deregulating the labour market, in an effort to deprive the working classes of their historically achieved labour and social rights, institutions and collective power. We are amidst a reactionary transformation of European societies, starting from those countries which first faced an insolvency crisis which called, according to mainstream neoliberal policies, for a fiscal consolidation (Greece, Ireland, Portugal, Spain etc.).

Austerity leads to recession and this puts pressure to every individual entrepreneur, both capitalists or middle bourgeoisie, to follow the path of “absolute surplus-value”, i.e. to try to consolidate her/his profit margins through wage cuts, intensification of the labour process, infringement of labour regulations and workers’ rights, massive redundancies, etc. From the perspective of big capitals’ interests, recession gives thus birth to a “process of creative destruction”: Redistribution of income and power to the benefit of capital, concentration of wealth in fewer hands (as small and medium enterprises, especially in retail trade, are being “cleared up” by big enterprises and shopping malls).

This strategy has its own rationality which is not completely obvious at a first glance. It perceives the crisis as an opportunity for a historic shift in the correlations of forces to the benefit of the capitalist power, subjecting European societies to the conditions of the unfettered functioning of financial markets, attempting to place all consequences of the systemic capitalist crisis on the shoulders of the working people.

3. A way-out of the crisis to the benefit of social majority

The class interests of the European working classes cannot be pushed forward through policies of national isolationism. Europe shall be reformed and “re-invented” on the basis of an anti-neoliberal and anti-capitalist agenda which brings together the working classes and the movements of all European countries in a united front of social change.

A government of the Left in Greece at first will aim at reversing the policy priorities, i.e. to replace the neoliberal agenda with a program of social reconstruction, redistribution of wealth starting from below, democracy and people’s direct participation, transparency and solidarity, as a model all European countries; to let the financial and economic elites pay for the crisis, in the perspective of a society, in which social needs, solidarity and the interests of the working majority will function as a policy prerequisite.

However, a left government and in a broader sense, left political forces will be able to implement such an alternative political Program only if they rely on and fight for people’s mass movements, in order reshuffle the correlation of social and political forces to the benefit of the working majority.

A progressive shift in Europe and the world can be put forward with social and political validity only in so far as social movements are being organized in a way that contests the existing capitalist system. A proper development of resistance that is immanent in the organization of the domination of capital may introduce frictions in the functioning of the international financial system. In other words, it may disorganize the efficiency of globalized financialization as a technology of power.

The resulting contradictions of the unequal distribution of social wealth, of the violent commodification of common of public goods, not only health, education and insurance but also basic nutrition, information, intellectual rights, environment et cetera, of the subsumption of the conditions of production, exchange and consumption under the control of the international financial system all set the base for the development of social movements and policy initiatives contesting contemporary capitalist power.

A left government cannot fulfill such a program of social transformation unless it derives its strength from the power of the streets, from people’s power.

Politically, my conception of finance as a technology of power for the neoliberal organization of capitalist rule, means that a left strategy shall target also finance, it shall fight to transform it into a public good, questioning the workings of capitalism from the perspective of social needs and democracy. By this formulation I suggest that social movements should demand that finance and money become collective goods, that is to say, to subordinate the terms of their production to the needs and democratic strategies of the working people and not to let these terms follow the class claims of capital. In other words, we need to start thinking how to promote political actions and choices that restrict the logic of capitalism.

What the present conjuncture in the EU concerns, the movements and the Left shall target the crucial financial entity that all Euro area states share in common: The ECB and thereon the sovereign debt problem.

Now both the ECB and public debt function as mechanisms promoting austerity and neoliberalism.

The sovereign debt question in the Euro-area is political in nature.

We shall demand that not only commercial banks but also the ECB functions in respect to the interests of social majority.

A proper policy proposal for Greece alone should follow the principles of the 1953 London Agreement on German External Debts: relief of the larger size of outstanding debt and a growth clause for the servicing of the rest. Nevertheless, this cannot be a viable plan for the EA as a whole, as public debt is being hold by banks and pension funds and a haircut would create the need of their re-capitalization. However, a political resolution of the problem is possible. According to a proposition put forward by two colleagues and me, the ECB should acquire a significant part of the outstanding sovereign debts (in market prices) of the countries in the Euro Area and converts them into zero-coupon bonds. No transfers will take place between individual states; taxpayers in any EA country are not going to be involved in the debt restructuring of any foreign Eurozone country. Debts will not be forgiven. Individual states will agree to buy them back in the future, when the sovereign debt ratio to the GDP will not exceed 20%. The costs for the ECB are manageable.

This model of an unconventional monetary intervention would give to progressive governments in the EA the necessary ground to develop social and welfare policies to the benefit of the working classes and social majority.

We shall fight together. Fighting together, we shall not be moved.